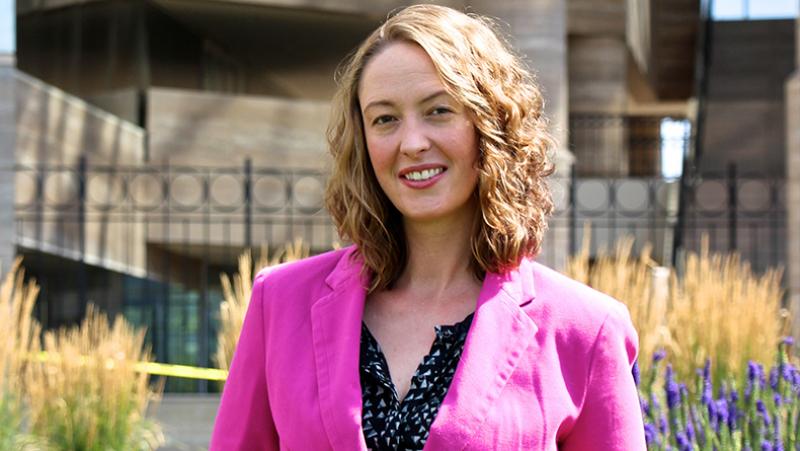 Despite strong evidence that fathers are important to children’s development, dads are often overlooked in perinatal home-visiting programs intended to reduce maltreatment and optimize developmental outcomes for kids.

Graduate School of Social Work Associate Professor Jennifer Bellamy, PhD, is shifting more focus onto fathers through Dads Matter, a new intervention designed to incorporate fathers into perinatal home-visiting programs. Typically, home-visiting programs start close to the time of a child’s birth and are focused on mothers and babies. Although the home-visiting programs — such as Parents as Teachers and Healthy Families — may continue until children are 3–5 years old, early positive results usually are not sustained over time.

“We believe that’s because we’re dissecting families,” Bellamy explains. “We’re providing something to mom over here, children over there, and we pay little attention to dads. Fathers have been the missing link.”

Dads Matter reorients home visiting to a family approach that includes fathers when they are present in the home. The intervention helps mothers and fathers to develop parenting skills together and to support one another.

Findings from a quasi-experimental pilot study of Dads Matter suggest that the intervention resulted in better engagement of fathers in services, better quality of father–child and mother–father relationships, and fewer child maltreatment indicators as compared to home visiting as usual. Study findings — “Promoting father involvement in early home visiting services for vulnerable families: Findings from a pilot study of ‘Dads matter’,” co-authored by Neil Guterman at New York University, Bellamy and Aaron Banman of the University of Nebraska Omaha — were recently published in the journal Child Abuse & Neglect.

Why have dads been left out? There are challenges both in working with fathers and working from a family perspective, Bellamy says, including greater complexity and time commitments. From the home visitor’s perspective, Bellamy explains, thinking about mom is simpler, and adding dad to the mix can feel like a doubling of the caseload.

Bias comes in, too. “Home visitors may hold a lot of assumptions about dads — particularly low-income, young dads of color,” says Bellamy, noting common stereotypes about drug use and gang affiliation. “Or because dad doesn’t live in the home, the assumption is that he doesn’t want to be there, that he’s not doing anything. That’s largely not true.” Bellamy cites evidence that 85 percent of nonresidential dads are involved in their child’s care in the first year.

Co-parenting is the focus of Dads Matter. The intervention is layered into standard home-visiting programs and includes exercises such as having parents talk together about how their family is changing. “Parents are taking on a new identity. They make assumptions about roles and may have to renegotiate,” Bellamy says. “Our intervention will bring that to the surface.” Parents identify common goals, discuss challenges and develop problem-solving skills. Dads Matter also includes a handful of modules that can be used individually with fathers.

Dads Matter has been implemented in Chicago via five large agencies that provide home-visiting services. The next phase of research includes a randomized controlled trial, which is wrapping up now. In addition to Bellamy and Guterman, current project collaborators include GSSW doctoral students Jon Phillips and Rachel Speer, and Shelby Thomas, an MSW student at GSSW. Trial participants complete a baseline interview before they receive services. In addition to parent self-report data, researchers audio record participants for 24 hours, allowing them to pick up on harsh parenting such as yelling and gauge the quality of parents’ interactions with their child. For instance, are both parents talking to the baby? Researchers repeat this process after four months — the length of time required to deliver Dads Matter — and again after one year.

“My hope is that we could shift the entire field of home visiting to be family inclusive, leveraging what is already a good service into an extraordinary service that has the opportunity to reduce child maltreatment widely,” Bellamy says.

Create better outcomes for kids by supporting projects like this one.