Bridge Project is changing the educational landscape for students 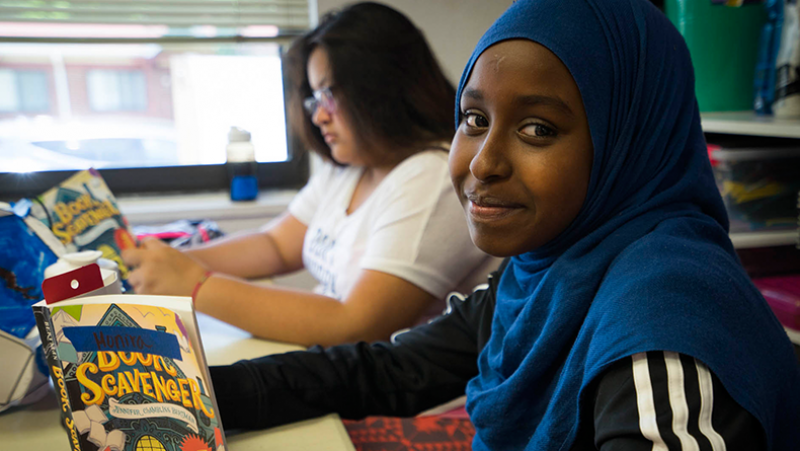 When it comes to the Bridge Project at GSSW (University of Denver Graduate School of Social Work), there are so many points of community impact it’s hard to focus on just one.

There’s the more than 25 years transforming the lives of thousands of children and families throughout Denver’s public-housing neighborhoods, and the generation of low-income children who have gone on to successful, self-sufficient lives and careers. Then consider the 100-percent high school graduation and post-secondary matriculation rates for Bridge students, the substantial literacy gains, higher achievement in science and math, the decline in discipline referrals and the 87 percent of Bridge students who experience significant increases in positive youth development markers such as confidence, connection and compassion. Then there are the 443 volunteers contributing more than 6,000 hours of service annually, and the community collaborations and enduring partnerships with agencies like the Denver Housing Authority (DHA).

With a mission to provide educational opportunities for children living in Denver’s public-housing neighborhoods, Bridge offers tutoring and mentoring, plus summer, after-school and scholarship programs to around 600 students every year. DHA provides space for Bridge in four public-housing communities.

There are significant challenges and risks in the lives of children growing up in public housing, and a likelihood that at-risk kids will get into trouble, says Jeff Jenson, the Philip D. and Eleanor G. Winn Endowed Professor for Children and Youth at GSSW. Bridge is intended to change that trajectory by promoting well-being through improvements in measures like academic performance. “I can’t think of a school of social work that has under its purview an active community engagement program like this for children and youth,” he says.

Among the most significant impacts of just the last year, says Executive Director Jesse Burne, is that Bridge now has comparison group data for the first time. “It’s one thing to be able to say within Bridge participants what the growth has been, but to be able to compare Bridge Project students to the same population of kids who are their peers, that's pretty significant for us. Bridge is an evidence-based model that the data demonstrate is having significant impact within a public housing community.”

“It’s difficult for community-based programs to find comparison groups of young people,” Jenson notes. “It's not practical or even ethical to randomly assign kids to different program options in public housing neighborhoods, so securing a comparison group of youth who live in other neighborhoods not served by Bridge was a significant step forward.”

Burne also points to enhanced college- and career-readiness programs for high school students, which have led to higher levels of high school graduation (100 percent, compared to 46 percent in the comparison group), higher levels of post-secondary enrollment, and successful transitions from high school.

And, Burne says, “Bridge now is fulfilling its potential to be cross-disciplinary. We’re at the intersection of where different industries and colleges come together to bring resources and expertise to further our mission.” He highlights a collaboration with Daniels College of Business on a Shark-Tank-style innovation competition that had 10 Bridge high school students learning alongside college students and faculty. Bridge also is collaborating with DU’s Ritchie School of Engineering on robotics, the Morgridge College of Education, and the psychology and economics departments.

What’s next? Conducting systematic longitudinal research, opening a new site in Denver’s Sun Valley neighborhood, and further developing and scaling services within the city of Denver.

The future also includes more emphasis on writing skills and an expansion of STEM programming for Bridge students. “When you think about the type of population who doesn’t go into the engineering field, when you look at the participants in our programs — such as young female refugees — you really start changing the landscape of what is accessible for those types of students,” Burne says.

“Educational equity is the biggest social justice issue of our time,” Burne notes. “We often look at this as a social work or education issue, but it is an economic one. We need to prepare students for a 21st century economy and help families compete economically. The question becomes how.

“When you look at a model like the Bridge Project, we’re there to create more self-sufficiency for our students and their families.”

Support the Bridge Project by volunteering or donating.