In Kenya, students discover how the lives of humans and animals intersect 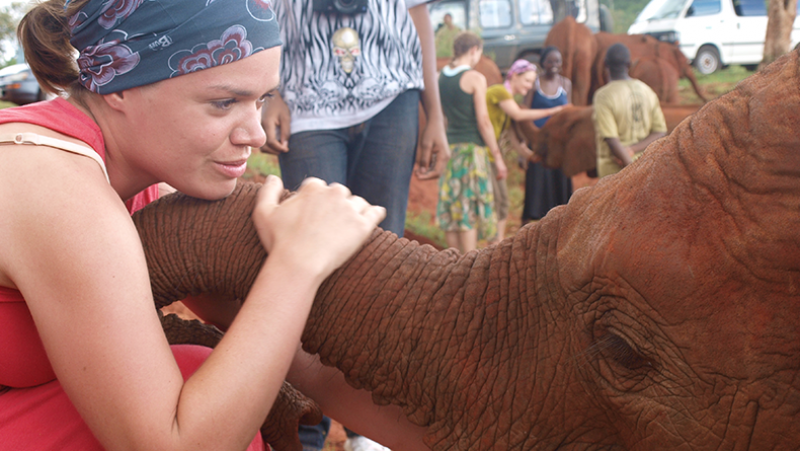 Stephanie Johnson will never forget, and perhaps never get over, that one baby hippo — forlorn, distraught, panicked and newly orphaned.

Johnson (MSW ’14) encountered it on Day 5 of a two-week trip to Kenya in fall 2014. She and 19 other University of Denver graduate students in a conservation social work class were riding along with a team from the African Network for Animal Welfare (ANAW), which was summoned to investigate the plight of the motherless toddler.

And there he was. Mired in mud and too frightened to move from the side of his dead parent, presumably a victim of drought and climate change.

“I will never forget that baby hippo just nudging his mom. This hippo was in such distress. All it wanted was for his mom to get up and show him what to do,” Johnson recalls.

The sight of the agitated animal left Johnson — along with her classmates — troubled and heartbroken.

“Even though it was just one hippo, in the scheme of things, nonetheless it was one life that was affected by human behavior,” Johnson says.

The question of human impact on the lives of animals — and the ramifications of that impact on human well-being — lies at the heart of Social Work in Kenya: Context, Empowerment and Sustainability. The course is offered annually by DU’s Graduate School of Social Work (GSSW) as part of its concentration in sustainable development and global practice. The concentration brings to the human-centric world of social work a host of topics generally considered the domain of environmental scientists: biodiversity, habitat loss, endangered wildlife and human overpopulation.

Why are social workers plunging into this territory? Philip Tedeschi and Sarah Bexell, who co-taught the class, explain it this way: Human health, welfare and well-being are optimized when the environment is respected, when water and air are clean, when native flora and fauna are healthy enough to play their role in nature’s intricate plan.

As Tedeschi and Bexell see it, the fauna are an especially important part of the equation. Both are affiliated with GSSW’s innovative Institute for Human-Animal Connection — he serves as the institute’s executive director; she manages its humane education and anti-cruelty program. Over the years, the institute has partnered with the ANAW on humane education programs.

In a country such as Kenya, known for its exotic wildlife, the rich mix of elephants, lions, giraffes, rhinos and wildebeests lures tourists. And tourism brings economic opportunities and jobs to a country that desperately needs both, Tedeschi notes. Remove the animals and the opportunities diminish. Stark as that equation is, it doesn’t factor into account the equally devastating toll on the country’s ecosystem and its culture.

For Johnson, the stakes are high enough that all of us, and not just the people of Kenya, need to understand the impact of our behaviors — from the purchase of an ivory trinket in, say, San Francisco’s Chinatown to the generation of greenhouse gases in a Beijing traffic jam to the expansion of a suburb into Colorado’s high plains.

After all, she says, “If all the animals cease to exist, so eventually will humans.”

While classroom presentations and assigned readings gave students an overview of the myriad challenges facing Kenya, it took the trip to the East African country to reveal their full scope and scale.

To fill in the big picture, students visited national parks and urban slums, tribal cultural centers and sanctuaries for rescued animals. They learned about the devastating effects of the ivory trade on elephants and the demand for bush meat on zebras and antelopes.

They also spent a day planting trees and seeing for themselves how reforestation efforts reduce poverty by supporting the economy and how they support biodiversity by offering shelter for butterflies and birds. On another day, they combed the bush to remove wire snares, thus saving unsuspecting animals from torturous deaths. They visited Lake Naivasha to see firsthand the effects of an emerging cut-flower industry on the area’s human and animal populations. And they joined a veterinary team on an excursion into the wild to treat a zebra severely injured by a snare.

Along the way, they raised questions, challenged their assumptions and searched — if not for answers and solutions — for insight.

Early in the trip, Tedeschi and Bexell took the students to the section of Nairobi known as Kibera, Africa’s largest slum.

With a population of between 500,000 or 1 million people, depending on how its borders are defined, Kibera is growing rapidly, thanks in large part, Tedeschi says, to a rural environment degraded by drought and desperate poverty.

“Now it has become its own urban environment. It’s a city within a city,” he says, adding that Nairobi has refused to provide even the most basic services, such as sewage infrastructure, electricity and schooling.

For social workers, Kibera presents a textbook study in the problems associated with extreme poverty.

One outpost of hope and progress is the Kibera Girls Soccer Academy, with which Tedeschi has worked for the last seven years. The school aims not just to educate its 130 individual students, but to empower their communities.

“The [population] can be permanently damaged without the protective and resiliency factors offered through education,” Tedeschi says. “Education may be the only method for changing deep poverty. This is a key strategy for reducing risks and increasing resilience.”

In their time at the academy, the GSSW students talked to the girls about the benefits of education and took time to ask them about their goals.

“That’s not a question most girls in Kibera have anyone asking them,” Tedeschi explains. “Deep poverty and significant barriers face these girls every day. One of the challenges is that they do not have experiences and relationships, especially with other educated women, outside of Kibera.”

GSSW students also accompanied the girls on home visits, meeting their families and seeing their challenges firsthand: disease and violence; open sewage in the streets; makeshift dwellings crowded together; homes without running water; streets without lights.

Brown was struck by how these conditions affected not just health but also safety. For example, with no plumbing in their homes, the girls were forced to use pay toilets. “It’s dangerous to go find a pay toilet at night — especially for young women,” Brown says.

Despite these conditions, she notes, the girls were deeply invested in their corner of the world. “The girls there don’t actually want to leave Kibera. They want to make it better. Despite all of the ideas we might have about what it is to live in a slum, there really is a sense of community there,” she says.

Not far from Nairobi, at an elephant orphanage operated by the David Sheldrick Wildlife Trust, the students observed another vulnerable population that is struggling to adapt — via human intervention — to harsh realities.

“At the orphanage,” Brown notes, “humans are countering, or attempting to counter, the effects of what humans have already done.”

Because of marketplace demand for ivory for trinkets and jewelry, the African elephant population has been under assault by poachers. According to conservation groups, as many as 35,000 elephants are lost each year, primarily to poaching. That’s one every 15 minutes, and if the killing continues at this pace, the African elephant could be extinct in just 10 years.

When poachers kill mature elephants, they leave any babies to fend for themselves. By the time they are rescued and delivered to an orphanage, the babies are weak, dehydrated and inconsolable from having witnessed the slaughter of their mothers. In fact, a significant number die from grief. What’s more, many have experienced the additional horror of an attack by predators. On the morning of the GSSW visit, Johnson says, a new orphan had just arrived, its tail bloodied by a ravenous hyena. Once at the orphanage, Johnson explains, the babies are paired with a keeper. (The number of orphans is high enough that the orphanage has become a significant employer of Kenyans.) Each keeper gets to know his charge intimately, staying with it through the night, rising every three hours for bottle feedings and comfort sessions. Without their mothers, the babies will often whimper and cry in the dark.

“[The keepers] are just very connected with these little guys,” Johnson says, noting that this relationship embodies the positive side of the human impact on animals. Without these keepers, the orphans would not survive.

But that the orphans need keepers to begin with raises her ire. Yes, it’s great that humans are saving these babies, she says, “But why are they there? Why are we having to set up these orphanages in the first place?”

The easy answer begs the next question. If human activity — namely poaching — is the problem, what can be done to stop it?

In posing this question, Johnson says, the students found no easy answers or solutions. The conventional wisdom holds that poachers poach because they can’t find jobs and need to feed their families. In truth, many of them poach because the ivory trade brings in far more money than the available jobs ever could.

That means that the solution cannot be reduced to job creation. It means that the problem has to be addressed at the marketplace, where consumers, wittingly or unwittingly, demand a product responsible for so much devastation.

Throughout their Kenyan visit, the students assembled periodically to process their experiences, emotions and impressions.

At the heart of their discussions, one question came up again and again. For a social worker, which is more important: helping impoverished humans or suffering animals?

“As a human you do have priorities,” Brown explains. “If I was in a situation where I had to save a dog or a small child, of course I am going to save the child.”

But add context, and the issue becomes stickier. “If you choose to work in the realm of animal welfare as a social worker, does that mean you are overvaluing animals over human beings?” Brown asks. And must the issues be forever framed in “either/or” terms? Either animals or human beings? Is it possible to help both? And might the future of both depend on a dramatic shift in thinking?

Back in Denver, Johnson logged her concluding thoughts — and formulated her next steps — in the field journal she started during the trip:

I can’t help but go on a trip like this and come home a different person. … So the question I keep asking myself is, now what?

I keep thinking of all those baby elephants who have been traumatized solely by human hands and deeds, who did nothing to deserve the suffering they’ve endured and will quite possibly live a life of fear and hypervigilance as they’re preyed upon so we can make trinkets.

My plan is not to focus on what’s NOT being done, and to focus on what I can do, any small contribution I can make in the name of animal welfare, social justice, environmental well-being and human rights.

This article originally appeared in the University of Denver Magazine.