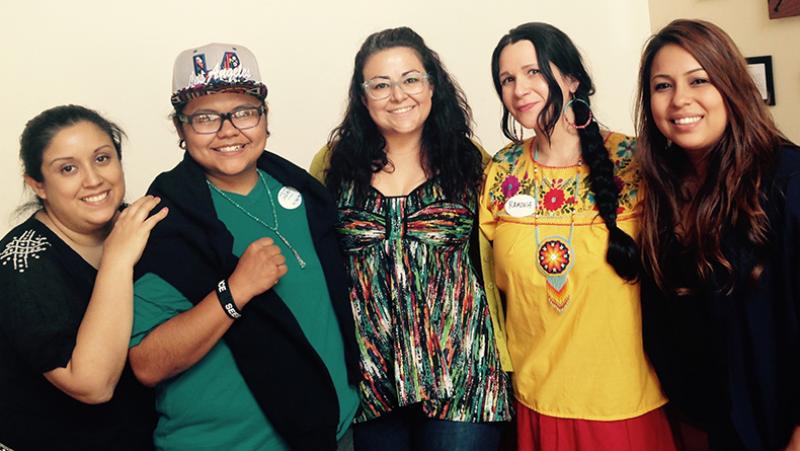 Through storytelling, Beltrán explains, we develop understanding about ourselves and our relationships with other people and the planet. Culture-centered practices like this can interrupt the intergenerational process of trauma and aid in healing, says Beltrán, a Xicana of Yaqui descent whose scholarship focuses on healing, health and well-being among indigenous communities, and on resilience rather than on problems.

This perspective infuses and informs all of Beltrán’s work, including the Indigenous Youth RiseUp! Culture-Centered HIV/AIDS Prevention Program.

Funded by a University of Denver Public Good Grant, the pilot project — in partnership with Café Cultura, Servicios de la Raza, Sisters of Color United for Education and other Colorado community organizations serving Latinx and indigenous youth — included a four-day workshop that used a Medicine Wheel framework for talking about physical, mental, social–relational and spiritual aspects of health. Storytelling was woven into the curriculum, including the final day, when Café Cultura facilitated a poetry-writing exercise synthesizing the workshop content. Evaluation included pre- and post-test surveys as well as individual interviews with participants, which included 23 indigenous youth ages 14–22.

A culture-centered approach
The curriculum included experiential modules on historical trauma, alcohol and other drug use, interpersonal violence and healthy relationships, and HIV and sexually transmitted infections. It “indigenized” HIV harm reduction approaches by integrating cultural beliefs, customs and practices, and by infusing teachings by indigenous elders, leaders and writers. For instance, Beltrán says, “We taught them how to put on condoms, but we also talked about what it means to treat your body and your partner’s body as if it is sacred, just as the Earth is sacred.”

This type of culture-centered approach is particularly important, Beltrán says, because although the indigenous community is tested for HIV and other sexually transmitted infections at relatively low rates and because HIV and indigenous LGBTQ/Two Spirit youth are at increased risk for substance use and suicidality, there are few evidence-based HIV curricula for indigenous youth. “When we have strong cultural components in educational settings, they improve outcomes,” says Beltrán, who collaborated with many community members on aspects of the project, including a forthcoming article coauthored with GSSW doctoral student Antonia Alvarez and community activist Miriam Madrid Puga.

For participants in the Indigenous Youth RiseUp! program, the approach was effective. For example, at the start of the program, only 50 percent of participants knew that you cannot contract HIV from a mosquito bite; that increased to 95 percent after the program. The study also saw a 30-percent increase in youth who reported that they know how to use a condom and how to check if it is safe to use.

“That to us was a really important finding, and that was the thing the community was most excited about,” Beltrán says. “Our community members understand that when our youth know who they are and where they come from and have a sense of pride, it’s easier to navigate challenges. Finding positivity in one’s identity is an important protective factor.”

It’s also notable, Beltrán says, that the Indigenous Youth RiseUp! pilot study originated from the community itself. For a decade, Denver’s indigenous and Latinx community has hosted an annual RiseUp! to HIV awareness event alongside Café Cultura’s open mic night. In 2013, the event organizers asked if students from Beltrán’s foundation Macro/Community Practice course could survey the community during the annual event to find out what additional programming was needed. From there, Beltrán and the participating organizations began working on writing a grant to pilot a culture-centered HIV prevention curriculum. Community members were involved in curriculum development, too.

“We’re not just going in and creating a study just for the sake of creating a study. By working with the community to understand what they need, we’re accountable to them,” says Beltrán, who presented study findings to the community first. “More important than getting this out to the academy is to take this back to the community. They can use the knowledge to sustain their practices, and this also gives them some empirical evidence they can use to find resources.”

“When our youth know who they are and where they come from and have a sense of pride, it’s easier to navigate challenges. Finding positivity in one’s identity is an important protective factor.” — Assistant Professor Ramona Beltrán

Improve health outcomes for youth by supporting projects like this.