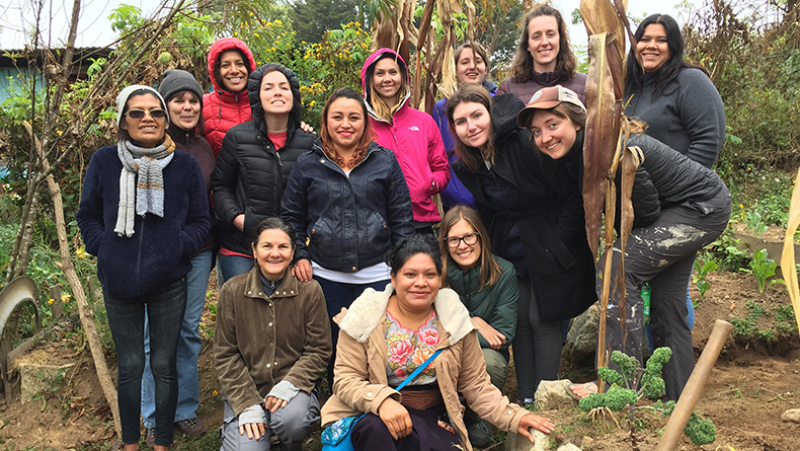 Lorena Gaibor says she’s always been a collaborator. So when the Graduate School of Social Work (GSSW) clinical assistant professor learned that Josef Korbel School of International Studies faculty and the Denver Justice and Peace Committee were piloting a field study course in Chiapas, Mexico, she jumped at the chance to partner on the effort.

“It was an amazing experience. We explored several human rights issues in Chiapas, which is one of the poorest areas in Mexico,” says Gaibor, program coordinator for GSSW’s Social Work with Latinos/as Certificate Program.

The class visited a community that was resisting a titanium mining operation, met with leaders on policy matters, tutored high school students in English and examined circumstances and economic policies that lead to migration to the U.S.

Students directly worked with and learned from several community partners, including NATIK, a nonprofit that fights hunger and promotes education, gender equality and sustainability in Mexico and Guatemala; and Frayba, a nongovernmental organization that defends human rights for indigenous villages and communities in Chiapas. They studied ecological building methods and learned about grassroots development alternatives at Alternatos, an alternative  ecological center near San Cristobal.

Holland says the course turned out to be “a powerful and unique partnership.”

Gaibor agrees and adds that social work was a natural fit with Holland’s effort. “Social work is naturally interdisciplinary, and it certainly proved to be in this case,” she says. “I think it made for a richer experience for everyone — we all learned from each other and were able to view issues from different perspectives.”

For example, Gaibor says, international studies students learned from social work “that as Westerners our positionality and privilege need to be carefully considered when working with clients and communities, and that we have as much to learn from the people that we work with as we have to offer to them.” Social work students, in turn, learned economic and political theory from the international studies students and developed an understanding of the role of global capital and development when communities’ needs are not taken into account.

The people of Chiapas wanted DU to share their story and struggles, Gaibor says. “We are definitely doing that, talking about Chiapas at conferences, at community forums, on panels, and writing papers. And we will continue to do that.” Most recently, they shared their experiences at a Encuentro Dinner for the DU and Denver community.

“Overall, I believe we’ve all been changed for the better by our experiences in Chiapas and our interdisciplinary collaboration,” Gaibor says.

“The interdisciplinary aspect of this trip helped me get more from the course than I would've otherwise,” says Tori Pfaeffle, an international studies master’s degree student. “It challenged me to think about development issues from different perspectives and gave me a more holistic understanding of the issues.”

Pfaeffle says one of the more inspiring takeaways was seeing resistance occur in different forms and from different groups. “It made me realize there are many ways in which we can contribute to and/or support these kinds of struggles.”

MSW student Sam Espinoza says as the course unfolded, she began to realize how much each discipline could learn from and offer each other. “It felt especially important to make those connections between disciplines,” Espinoza says. “The course was so dense and rich for me, being able to see classroom knowledge and theories — namely, dependency theory and neoliberal ideologies — take shape in the real world.

“It’s one of those courses where the learning doesn’t end after the trip,” Espinoza adds. “I am going to be thinking about it and processing the information as I continue to move through the world.”