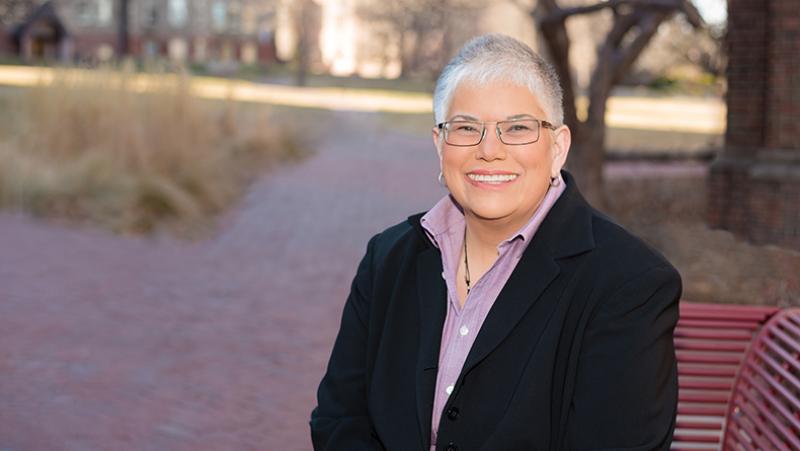 Injustice was part of Debora Ortega’s life growing up in Los Angeles. Her dad died when she was 10, her mom worked two jobs and her older brother was racially profiled by police.

“The stress on my family and the consequences to my brother had an impact not only on his identity but on our whole family,” says Ortega, PhD, who now is a Graduate School of Social Work (GSSW) professor. “No one could help us with the consequences of racism.”

That was then. Today Ortega is tackling racism head-on with her teaching and scholarship in the area of social inequality and multicultural social work, considered through the lens of critical race theory.

For Ortega, reform should start within the academy and the field of social work itself — particularly the Grand Challenges for Social Work initiative, which Ortega and others say does not adequately address inequity experienced by people of color.

Take, for instance, the grand challenge to promote smart decarceration. “The working paper did a good job explaining the problem,” Ortega says, noting that it identifies the over-representation of race in prisons. What’s missing, she says, are recommendations for structural changes, such as making prisons more humane and reducing racial profiling. “The paper’s solution is to fix the people, not the system. But systemic racism is the big problem and why we have so much incarceration.

And, she says, “Instead of trying to intervene with criminals, we need to help people with their painful experiences,” like those she and her brother faced. “People need to understand why the things happening to them are happening to them, how to organize around it and not to personalize it. When you can stop personalizing it, we can talk about how to participate in reform.”

Ortega is not alone in her perspective. In 2017, University of Washington Dean Edwina Uehara convened a 2-day think tank with Ortega and other scholars representing a wide range of identities, fields and faculty ranks. “What grew out of that was that the grandest challenge of all was not being addressed: racism, white supremacy, neoliberalism and colonization,” Ortega says. She and the other think-tank participants then presented related papers at the Society for Social Work and Research January 2018 conference. Ortega’s topic was “Maintaining Domination: Whitesplaining Social Problems and Solutions.”

Ortega discussed critical race theory, the way that academic careers are built on the number of articles published rather than the quality of the articles and their impact on ameliorating social ills, how doctoral students have their “racial identities erased,” and how social work research is often based on participants who are predominantly white — “not the people we serve.” By negating or obfuscating the link between race and poverty and treating race as just a demographic variable, social sciences research can perpetuate and even promote white supremacy, Ortega says.

In March 2018, Ortega delivered a keynote — “Whitesplaining as a Social Problem” — at the Latino Social Workers Organization conference on promoting justice in social work practice. Ortega says she is trying to reveal “all the ways we’re trained to be biased in this country.” If you can recognize it, Ortega says, you can stop the actions that reinforce bias.

On campus and online in the MSW@Denver program, Ortega is the faculty lead for the course Power, Privilege and Oppression, for which she created a 6-minute animated video about identity and social structural inequality.

The video is an easy entry into a particularly difficult topic, Ortega says. “As a graduate school of social work, we help people learn how to think about things more deeply than what they read or see,” she says. “We teach students to dig beneath and deep — to challenge their own belief systems and critically look at behaviors, beliefs and thought processes.

“Are they life-giving, or are they taking someone’s life away?”