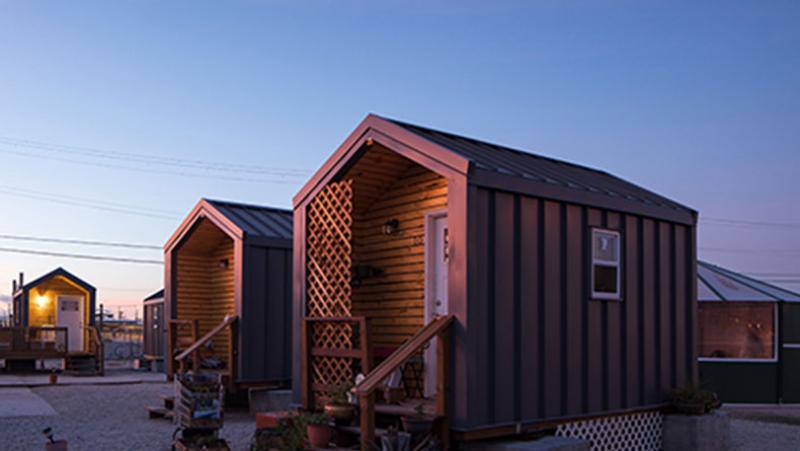 When Beloved Community Village (BCV) opened in Denver’s trendy RiNO neighborhood in July 2017, no one knew how long the tiny-home community would last, or whether it would prove to be a successful support for people experiencing homelessness.

Now nearly a year later, the answer is in: The village is a success.

That’s the finding of the Graduate School of Social Work (GSSW) Center on Housing and Homelessness Research (CHHR), which recently completed a nine-month evaluation of the village.

“Across the methods and participants, the message is consistent: The village is welcome, villagers are succeeding and are an important part of the community,” says GSSW Associate Professor Daniel Brisson, executive director of CHHR.

Launched by the Colorado Village Collaborative as a 180-day pilot project, BCV is Denver’s first tiny home community. It is a democratically self-governed “intentional community” of 11 tiny homes for up to 22 people experiencing homelessness. Collaborative member Denver Homeless Out Loud selected some of the first residents based on risk and need, and those villagers then selected other community members. The village provides shelter, of course, but it’s also intended to cultivate self-empowerment and a shared sense of community.

At an individual level, the team looked at whether living in BCV resulted in changes to employment and education, financial capabilities, and health and wellbeing. Among the findings were improvements in employment outcomes and health and wellbeing indicators. For instance, villagers reported increased satisfaction and decreased anxiety after moving into the village. Villagers also reported a significant decrease in how often their belongings were stolen after moving into BCV. And, they reported making “moderate progress” in meeting their own personal goals in areas such as securing long-term housing and managing their finances.

The team also examined broader community impacts, such as traffic, noise and safety, finding few challenges associated with the village. At the organizational level, they assessed development of a sense of community within the village and determined that a sense of community had developed — social capital that contribute to better health and wellbeing.

“We decide what goes on here,” one villager reported. “It gives people back their confidence and puts people in leadership roles they didn’t know they could do and then excel at.”

The evaluation also documented infrastructure challenges, such as food storage and preparation limitations, and difficulties inherent in the intentional community model, such as a lack of full participation by all members.

For a new intervention, research of this type is invaluable, Brisson says, particularly with other tiny-home villages planned for Denver and other cities. “This is an alternative approach to providing supports and services for people experiencing homelessness. And because it’s an alternative approach, there have been lots of people opining about why this is a good or bad idea. But until we conduct research, we really don’t know what works.

“Is this an approach that we should continue to spend resources on? I feel confident in saying let’s keep going with this approach,” Brisson adds.

Despite the evidence that Denver’s BCV is working, Brisson cautions, “This doesn’t mean that tiny homes anywhere will be a success. This approach is novel. We need to know a lot more.”

To that end, CHHR, funders and community partners are discussing ongoing evaluation of tiny homes as a viable alternative for people experiencing homelessness. And, Brisson says, the center continues to pursue questions around homelessness and other issues that people experiencing poverty face. “We want to serve as a community resource so those living in poverty or without a home can improve their health and wellbeing.”

Read the summary evaluation, or contact the Barton Institute to request the full report.