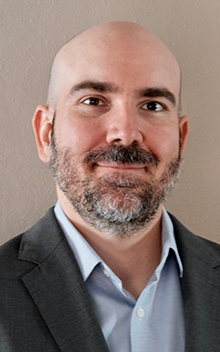 Emmanuel Martinez had a successful career with the United Nations International Organization for Migration, working in Honduras, El Salvador, Cuba and Kenya to implement humanitarian projects that addressed the needs of vulnerable migrants. But Martinez is a married gay man, and he and his husband can only live together legally in a few countries. When Martinez was transferred to Kenya, where homosexuality can be prosecuted as a felony, his husband had to move back to the United States, and Martinez was faced with a difficult choice: live apart from the man he loves or give up the career he loves.

Martinez saw the choice as an opportunity to not only reunite with his husband but to also pursue a graduate degree in social work — something he’d “always wanted.” So, at the age of 38, Martinez resigned from the UN and enrolled in the University of Denver Graduate School of Social Work (GSSW) Denver Campus MSW Program, where he graduated this spring.

Martinez started his career as a labor organizer and then worked in international human rights for a decade. “In some ways, I have always done social services,” he says, noting that some of his supervisors had MSWs. But because so much of his career was macro focused, he decided to supplement that on-the-job experience with an MSW concentration in Mental Health — “an area where I had more opportunity to learn and grow.”

Martinez said he saw firsthand that mental health isn’t always prioritized in responses to humanitarian crises, where the focus is often on physical safety and needs such as food, shelter and hygiene. “I want to take the lessons I learned in my MSW program and apply those to North American and Central American countries where there are unaddressed mental health needs among people who have experienced decades of poverty and trauma,” says Martinez, who was a CSWE Minority Fellow and received several GSSW scholarships to fund his education.

Although unmet mental health needs exist outside of the United States, there is need close to home, too. Martinez will be pursuing his licensure and has started an integrated behavioral health position with Clinica Family Health, a medical safety net “for those who otherwise might fall through the cracks of the American Health Care system.” Clinica was founded 40 years ago to provide medical primary care to mostly Spanish-speaking migrant farmworkers in Colorado’s Lafayette/Louisville area. Today, it serves more than 58,000 people a year in six community-based medical clinics and three dental clinics in the northwest Denver metro area.

“I grew up in East L.A., which is a traditional Chicano barrio. My mom relied on free and low-cost community clinics for her health needs. She got fantastic care,” Martinez says. “I want to help people like my mom.”

Martinez eventually wants to manage programs that help vulnerable people. He and his husband may live and work abroad again at some point. If they stay in the United States, he says he’ll likely continue to work with immigrant communities.

“The social work profession looks at the whole person and person-in-environment in a way that is more meaningful than other fields. I appreciate the social work values the profession aspires to, recognizing the dignity and worth of the person,” Martinez says. Imagine, he says, if refugee camps were trauma informed instead of traumatizing, for instance. “I want to be able to incorporate mental health interventions in a new way.”