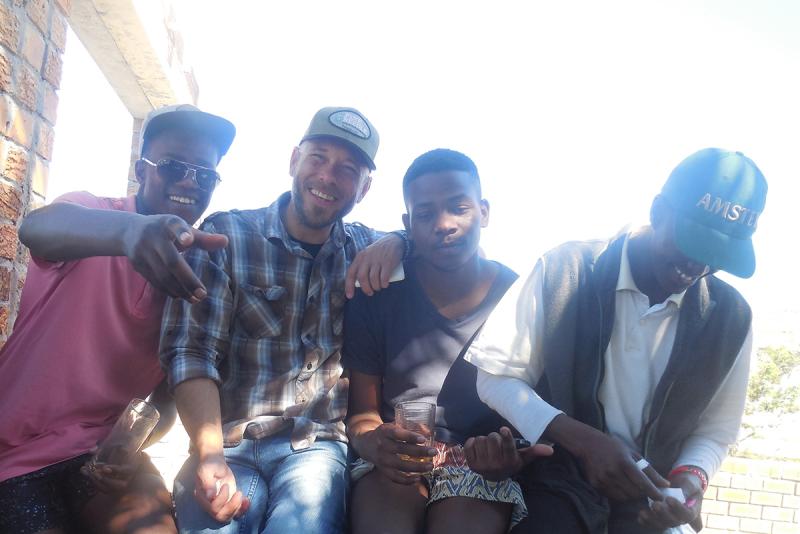 For Jason St. Mary, MSW ’14, PhD ’20, attending the University of Denver Graduate School of Social Work (GSSW) Four Corners MSW Program was the first step on a journey that has taken him around the world and back home again.

Originally from Phoenix, St. Mary was the first person in his family to earn an undergraduate degree, and when he started the MSW program in Durango, Colorado, he thought he would become a clinical social worker. But sitting at an event next to then-Dean James Herbert Williams, who talked about his work in sub-Saharan Africa, an interest in research was sparked.

St. Mary was among the first cohort of students to complete GSSW’s Social Work and Social Justice in South Africa course, and he went on to co-teach the course with Williams and other faculty. It was Williams who suggested St. Mary consider a PhD.

As a doctoral student, St. Mary commuted every other week from Durango to Denver and made seven trips to the African continent. His research focused on exploring the effects of colonialism and capitalism on Indigenous cultures and under-resourced countries that resulted in historical constructs of extreme oppression, exploitation and intergenerational trauma.

Although part of his heart was in Africa, a bigger piece remained in Durango, where his son, Jackson, lived. Once doctoral coursework was done, St. Mary decided to return home to raise his child and write his dissertation. He also realized that although he had planned on an international teaching and research career, that would have to wait until his son was grown.

St. Mary says it was a difficult decision, and the transition back to Durango was challenging for many reasons. He encountered unstable housing for nearly two years, often sleeping on couches, floors, and in his car. St. Mary says the emotional and psychological toll was immense and impacted his mental health. “There were points when I truly just wanted to give up, in many ways.” But, he says, “I know this made me stronger on the other side.”

Despite the circumstances, it is a decision he’s at peace with.

“My priorities began aligning differently as I got into the writing process, and I began to see that there needed to be more balance,” St. Mary says. “My son was four when I moved away, and he’s 10 now. For me to graduate and for him to see all the work I put in, it’s really important.”

In Durango, St. Mary is a program director for La Plata Youth Services, which supports and advocates for youth facing challenges in school, home or court. He supervises four programs, including school-based restorative justice, behavioral health and other programs serving nearly 1,000 youth each year. There, St. Mary applies the equity and social justice lens and intercultural experience developed at GSSW, reinforcing his work with research to foster conversations across differences and support marginalized youth.

In addition to his work at La Plata Youth Services, St. Mary teaches in the Four Corners MSW program and the MSW@Denver online program, and his agency supervises MSW interns. He’s also working on two books related to his dissertation research into the lived experiences of Black South African township youth — an ethnography about a white man living in a Black township, and a how-to manual for conducting international research, practice and education in communities that experience colonization and oppression. He stays in contact with his friends, colleagues and research participants in South Africa.

“There have been quite a few moments in my life where I’ve been in places around the world and asked myself, ‘How did I get here?’” St. Mary reflects. “I’ve had the opportunity to study with scholars throughout the country and world, to travel to places I didn’t know existed. I lived in a Black township in South Africa — out of 55,000 people, I was the one white person — and some really cool research came out of it. If you would have told me 20 years ago this was my journey, I would have laughed.”

St. Mary doesn’t know what the future holds, or whether his path will take him back to South Africa or no farther than the mountains of the Southwest. For now, he says, “I’m not going anywhere. This is where my heart is. I trust that things are going to work out.”