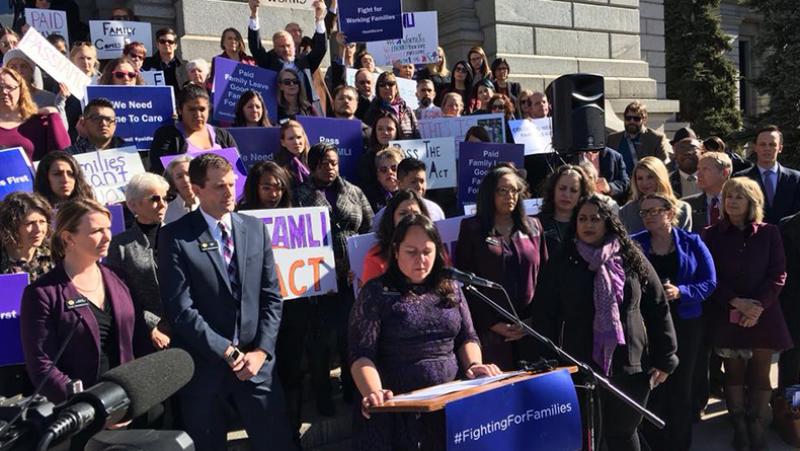 Most recently that's meant making multiple treks to the Colorado State Capitol to testify in support of HB18-1001, the Colorado Medical Leave Insurance Act (FAMLI), which is currently making its way through House committees. It's a trip she's been making nearly every year since 2015, advocating for a state insurance program that would provide partial wage-replacement benefits to eligible individuals who have to take leave from work to care for a new child or a sick family member, or for their own serious health condition.

Paid medical leave is something of a professional crusade for Greenfield, whose research focuses on the intersections of health and wealth disparities among women, especially through the mechanism of caregiving. But the issue is personal, too. In 2014, Greenfield’s twin sons were born seven weeks early and spent the first month of their lives in the NICU. Greenfield had access to paid leave, which allowed her to stay with her children and participate in their care. But while she stayed at her kids’ bedsides, she watched as other families struggled with the reality of having to choose their jobs over their children.

“We know from research it’s critically important for parents to hold preterm babies and be involved in their care,” says Greenfield, “but if they don’t show up for work they’re going to lose their jobs. I was witnessing this firsthand in the hospital with my kids.”

Only 13% of Colorado workers have access to paid family leave, and the resulting financial burden for individuals, families, employers, the medical system and the economy is enormous. Nationwide, workers lose as much as $3 trillion annually in lost wages, retirement contributions and missed promotions.

Greenfield realized, “I could testify as the mom who’d experienced it and as the researcher who has studied the issue. Parents are struggling with how to do this. I wouldn’t be doing my job as a social worker if I wasn’t making sure this lived experience of people is shared with lawmakers.”

She also realized she could add to the issue knowledge base. So, Greenfield set out to study whether there is an association between better health outcomes for preterm infants whose mothers have access to paid leave. She's collaborating on the research with Dr. Sunah Hwang, a neonatologist from the University of Colorado (CU) School of Medicine, Madalynn Neu, PhD, a nurse scientist from the CU College of Nursing, and former GSSW doctoral student Susanne Klawetter, PhD ’17, who is now a faculty member at Portland State University.

Data collection is underway in two Colorado hospitals, where the research team — including GSSW doctoral student Kristi Roybal and MSW students Kristi Allen and Rachel Protentis — is interviewing the mothers of preterm infants, gathering data about their employment status, access to parental leave, family support, mental health, substance use and other variables. Mothers take surveys at baseline and six weeks after discharge, and they complete daily diaries, documenting the time they spend in the NICU and the types of activities they engage in there. The research team also is tracking the health of the preterm infants until six weeks after discharge. “We do all of this in English and in Spanish, hoping to get some good information about how experiences may differ by primary language used, and by race and ethnicity,” Greenfield explains, noting that the team will begin recruiting participants in two additional hospitals soon. Data collection for the study will continue for another 12 to 18 months.

Meanwhile, Greenfield also writes op-eds, is prolific on Twitter (follow her @jcgreenfield), and is incorporating her personal advocacy case study in the classroom, where her students write their own op-eds and participate in mock testimony. Some have even joined her at the Capitol to listen to her testimony. “One of the most effective ways to teach it is to go do it,” Greenfield says. “I feel like it makes me stronger as an instructor to be actively engaged rather than referring to something I did years ago.”

Some days, Greenfield says, “I feel like being a working mom feels nearly impossible. It makes me feel really frustrated but really motivated that we don’t have a system of policies in place to support being a working mother.

“I was already working on these issues before becoming a parent,” she adds, “but now I’m incredibly motivated to get some change in place.”