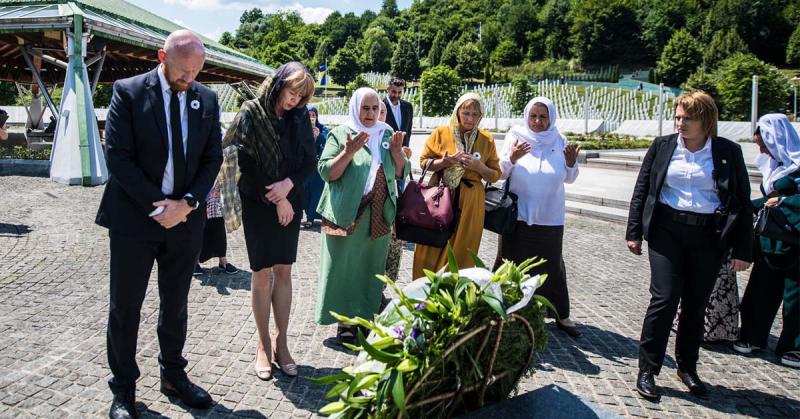 Although University of Denver Graduate School of Social Work (GSSW) Professor of the Practice Ann Petrila has been to Bosnia many times, returning this past summer to Srebrenica — the site of the 1995 genocide —was the most intense trip she’s taken. In the wake of the pandemic and global lockdown, she says, “My armor wasn’t there.”

Petrila was in Bosnia for a conference on oral histories and events related to the release of her new book, Voices from Srebrenica: Survivor Narratives of the Bosnian Genocide, co-authored with genocide survivor Hasan Hasanović, director of the Oral History Project at the Srebrenica Memorial Center. The book documents the killing of more than 8,000 Muslim men and boys, sharing eyewitness accounts of the genocide and “revealing stories of individual trauma, loss and resilience.”

Since release of the book in 2020, the authors have participated in 10 events hosted (usually virtually) in several nations, including a webinar co-hosted by GSSW and the Srebrenica Memorial Center and an event hosted by the U.S. Embassy in Sarajevo. An event in the United Kingdom included a BBC war journalist, and an event in Scotland included a forensic pathologist who identified remains of genocide victims. “The most moving event we did was in person at the Srebrenica genocide memorial where everything happened — in the battery factory where people sought refuge and hoped for protection from the U.N. forces. It had come full circle,” says Petrila, coordinator of GSSW’s Global Initiatives and Global Social Work Certificate and director of Global Practice Bosnia. “People are interested in learning and knowing about the genocide. That’s what we wanted: to memorialize these stories and elevate the voices of people who otherwise didn’t have an opportunity to get their stories told and combat the culture of denial in Bosnia. We’ve done that.”

The book also shares insights into the sociopolitical conditions that make genocide possible, including othering people, propaganda, hate speech and incitement of crowds — all increasingly common in the United States, says Petrila, who teaches a course on genocide. “How do you incite such hatred to convince people to slaughter their neighbors? It’s by dehumanizing them. We see this dehumanizing going on here in the United States.”

GSSW offers an MSW certificate in Global Social Work and international courses and internships, including in Bosnia.