Social workers are challenging and reimagining the U.S. justice system 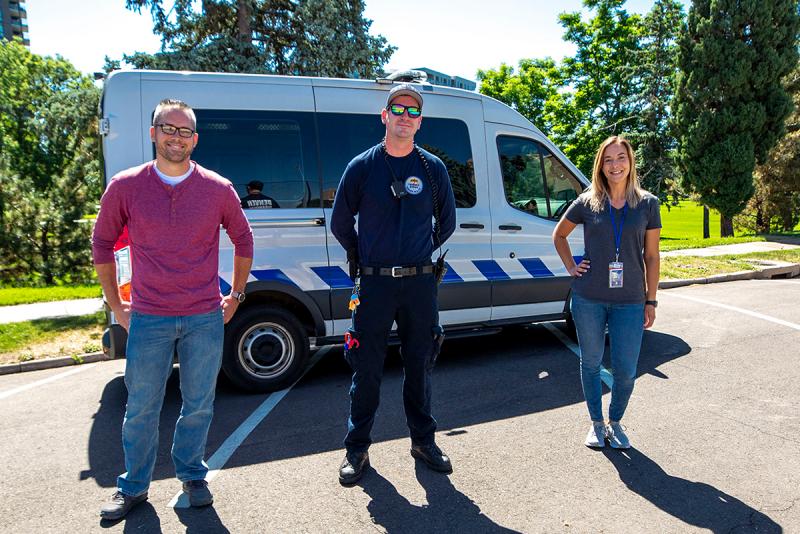 In June 2020, the City of Denver tried something relatively new: Deploying health and mental health professionals instead of police. In its first six months of operation, Denver’s STAR program (Support Team Assisted Response) responded to 748 incidents, and of those, not a single person was arrested. The program has been so successful, it’s already being expanded.

Creative, collaborative, community-based programs like STAR remove barriers to service, transporting clinical social work beyond four walls to meet people in need where they are. Such programs also respond to deeply rooted problems in the criminal justice and related systems and signal a shift — albeit incremental — away from traditional policing and criminal justice practices that disproportionately harm people and communities of color.

Communities nationwide are demanding anti-carceral interventions like STAR to help address a national incarceration crisis, prompting social workers to examine their own complicity in unjust systems.  The United States leads the world in incarceration, which exacts a devastating economic and human toll — particularly for individuals, families and communities of color. Social work’s Grand Challenge to Promote Smart Decarceration has prioritized this problem for the profession, aiming to “dramatically reduce the number of people who are imprisoned and enable the nation to embrace a more effective and just approach to public safety.”

In the From Criminalization to Community series, GSSW and community members reimagined justice and explored social work’s role in safety, security and policing.

There are more people with mental illness in jails than in psychiatric hospitals, according to the national Stepping Up Initiative to reduce the number of people with mental illness in the criminal legal system. GSSW alumna Monika Witt, MSW ’15, is the Stepping Up program manager for the City of Philadelphia, which she says is looking upstream of incarceration to intercept people before they intersect with the criminal legal system.

“In Philadelphia, so many of the problems folks face are related to poverty. It’s one of the key social determinants of health,” says Witt, a University of Denver Graduate School of Social Work (GSSW) adjunct instructor. “For folks with severe mental illness, early intervention makes a huge difference in their trajectory and quality of life, but schools with just one social worker may miss behavioral health issues. It’s all very connected. By really investing in local communities and neighborhoods, we can change those trajectories early on.”

To do this, Witt says, creative, cross-system approaches are needed, along with “new ways of social working.” For example, she says, MSW programs “need to cultivate and recruit those who want to get their hands dirty as co-responders and first responders.”

Learn more about the GSSW alumni working as community co-responders and first responders in Denver.

Although there is widespread support for alternative programs such as STAR, there’s less consensus around the movement to defund the police, explains Assistant Professor Shannon Sliva. On one side are those who believe social work should be working more deliberately from within to reform and improve policing and other aspects of the criminal legal system. On the other side are those who believe that those systems are fundamentally, irredeemably flawed and will always resist and prevent change.

Most social workers are left somewhere in the middle, with one foot in the current world and one foot “in the world we haven’t yet created,” Sliva says, quoting activist and author Aurora Levins Morales.

In June 2020, Sliva and more than 1,000 other social work educators, students and social workers signed on to an open letter addressing social work’s relationship with law enforcement, directed to the National Association of Social Workers and allied organizations. Among its demands was a call to publicly endorse the national Black Lives Matter Petition to defund the police and reinvest in communities.

Meanwhile, Sliva says, more than 17,000 people are incarcerated just in Colorado. “There are things we could do to make their lives better and improve the quality of systemic decision-making around justice policy,” says Sliva, who is co-leading a multidisciplinary University of Denver team working to advance prison reforms in Colorado and nationally. Funded by a four-year, $500,000 grant from the Urban Institute’s Justice Policy Center, the team is working with administrators, staff and incarcerated people at Sterling Correctional Facility to design and test reforms that improve the well-being of people inside through a community-based research process. The DU team is a member of the Prison Research and Innovation Network, a five-state research consortium.

Sliva’s research centers on restorative justice and, more broadly, “understanding at a basic level the role of dialog and relationships in creating the conditions for justice. Those approaches are the same lenses through which I think about police violence and racial violence,” Sliva says. “We have to be in dialog with one another and build relationships that are powerful enough that we don’t rely on police to resolve conflict and address harm. For social work, that means thinking about how we can build up relationships, co-create spaces for change, and offer our skills to community-led movements. We have to contribute to networks and relationships in communities that meet people’s needs.”

As an alternative to punishment, restorative justice practices promote healing between someone who has caused harm and someone who has experienced harm. “It’s about taking accountability and doing what we can to repair the harm,” Sliva explains.

In Denver, the Conflict Center is a leader in community problem-solving and restorative practices. “Our primary focus is giving people the skills and tools to resolve conflict,” says Jessica Sherwood, director of restorative practices and a longtime GSSW field instructor. Through the Restorative Denver Program — a partnership with the Denver District Attorney’s Office — the center provides restorative justice programs for adult offenders.

Restorative justice is far less time intensive and far less expensive than the traditional court system, Sherwood says, noting that a Restorative Denver case can be resolved within three months. And, in addition to benefitting the person who caused harm, restorative justice helps those who experienced harm, too. “People who have been harmed report far greater levels of satisfaction in the outcome” compared to the traditional legal process, Sherwood says. “It helps them regain a sense of safety and trust in the world. They get a lot more resolution when they’re part of the process.”

“In my opinion, anyone connected with the criminal justice system, from police officers to the district attorney, should have full training in restorative justice,” Sherwood says. “Everyone should have a basic understanding. Imagine, if officers were trained in restorative justice, it could have potential positive impact at the moment the door to entering the criminal justice system opens.”

Beyond the criminal legal system, “If we are going to dismantle the framework set by white supremacy and patriarchy, we need to start applying a restorative lens to everything we can,” Sherwood adds. “A restorative perspective is a complement to other practices already in place. Restorative practices don’t butt heads with anything but punitive punishment. It’s a more compassionate approach to addressing the whole person.”

“The restorative justice approach says that you have to reckon before you reconcile,” Sliva adds. “There hasn’t really been a reckoning in this country yet for the harms Black and Indigenous folks have faced. There hasn’t been that moment of accountability.”

For Assistant Professor Sophia Sarantakos, that reckoning should include abolition. Their research and scholarship aims to reduce the size, scope and power of the prison industrial complex, looking instead to community-based systems of accountability and care.

“I don’t want there to be cages for anyone, anywhere, for any reason,” says Sarantakos, who advocates for defunding and ultimately abolishing the police and instead investing those resources into community.

“Something that most folx miss (predominantly white people) is that Indigenous, Black, Brown, queer and disabled communities have long lineages of strategies for how to care for themselves, because they’ve long been criminalized and abandoned by the state,” Sarantakos says. “Not only should we be questioning policing, but we should recognize and disrupt how much we continue to invest in approaches that have a proven record of failure for keeping us safe while our systems of care are grossly under-resourced.”

Practiced mainly by marginalized communities, transformative justice is a praxis that works to address the root causes of harm without any involvement from the state. By not relying on state systems (such as the criminal legal system), by centering the needs of the person who caused harm and by cultivating practices that prevent violence, transformative justice moves beyond the restorative justice approach. For instance, the Bay Area Transformative Justice Collective is working toward “a world where everyday people can intervene in incidences of child sexual abuse in ways that not only meet immediate needs but also prevent future violence and harm.” In Chicago, Assata’s Daughters organizes young Black people “around the demand for Black liberation, particularly a demand for abolition.”

The work of organizations like these needs to be uplifted, amplified and funded, Sarantakos says. “Non-carceral approaches to harm and need are not only beneficial for marginalized communities. They’re what all of us need to truly live healthy lives.”

The transformative justice approach can be, admittedly, a tough sell, Sarantakos says, even among social workers. “Our systems of punishment are ingrained in us. Too many believe that they’re necessary and redeemable.”

Sarantakos believes that abolition is possible, and that one of the biggest barriers is a lack of imagination. Sliva agrees. “We need to be teaching social workers to be creative about the future. What would it take for us, as educators, to create a space for imagining and reimagining?”

“If we built all of this, we can certainly build something else,” Sarantakos adds. “What makes you think that this is as good as it gets? What makes you think we can’t do better and make beautiful things? I want people to reset their minds and leave so much room for what could happen.”

“Social workers could nurture something beautiful to grow.”