A Leader in Social Work Education

Alumnus Santos H. Hernández, PhD ’85, reflects on lessons learned over his career as a social work educator and leader 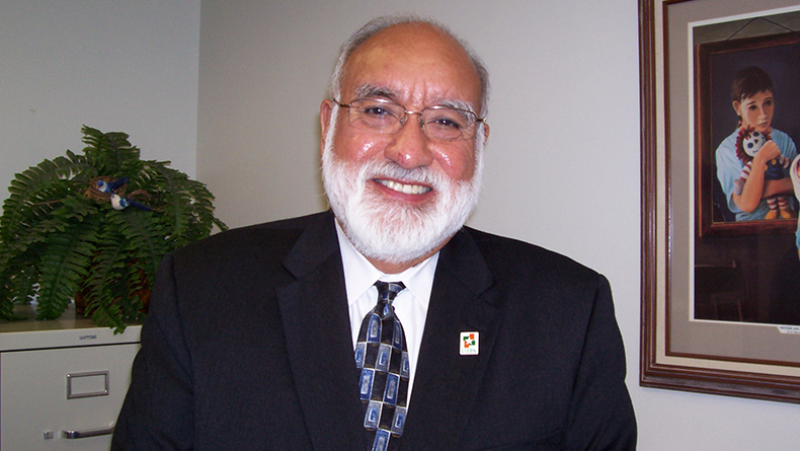 University of Denver Graduate School of Social Work (GSSW) alumnus Santos H. Hernández, PhD ’85, used to think of life like a mosaic, with all the individual pieces fitting together and contributing to the whole picture.

Now at the end of his career, he says, he sees life as a kaleidoscope. “If you look at it from a different point of view, the whole pattern changes. The things I’ve learned in my life aren’t static. You gain a different perspective based on your point of view.”

With a career spanning 45 years as a social work educator, two deanships, two lifetime achievement awards, leadership of social work professional organizations, countless accolades and numerous firsts, Hernández, is counted among GSSW’s most notable alumni. But he doesn’t see himself that way.

“I don’t know what’s been notable about my career,” Hernández says. “I just did the best I could.”

A Path out of Poverty

Hernández grew up in Lytle, Texas, a small town near San Antonio. He was the second youngest of 12 kids. His father died when Hernández was just 7, and he and his siblings worked during their childhood to help support the family. While the older siblings quit school to work, the younger kids — including Hernández — worked the agricultural fields during summers. His mother, he says, raised a family on $150 a month in survivor’s benefits.

“The last thing I ever thought I would do was go to college and be a university professor,” Hernández says.

When he enrolled as an undergraduate at Our Lady of the Lake University, Hernández intended to major in bilingual education and become an elementary school teacher. “We saw education as the answer, the way out of poverty, the way to advance,” says Hernández, noting that there was a lack of Hispanic males in the primary grades.

“I was working in a school at the time, and they had a breakfast program. Most of the kids I worked with participated; if they hadn’t had a breakfast program, a lot of these kids would go to school hungry,” Hernández recalls. “It occurred to me that something needed to be done before the kids get to school, something needed to be done to help the families.”

That something was social work.

In the last semester of his senior year, Hernández changed his major from education to liberal arts so he could start the school’s MSW program that fall. With a master’s degree in hand, Hernández then headed to San Diego, California, where he worked in Chicano community advocacy as a Ford Foundation Leadership Development Fellow. The fellowship then sent him to Washington, DC, where he helped to organize support for the 1975 expansion of the Voting Rights Act to protect language minorities from voting discrimination. He then landed in Denver, where he worked on a successful campaign to mandate bilingual education in public schools; Colorado was the first U.S. state to do so.

Hernández next worked in public assistance and school social work before ultimately becoming a teacher — just not in elementary schools. He joined the faculty at San Jose State University and later Eastern Washington University, where he directed the Chicano Education Program. Although he wasn’t quite sure whether he a wanted career in academia, he knew that to get tenure, he needed a PhD.

Encouraged by a colleague who was a friend of GSSW Dean LeVerne McCummings, Hernández returned to Denver in 1979 to start GSSW’s doctoral program as a Council on Social Work Education Minority Doctoral Fellow. Although McCummings and the previous dean, Kenneth W. Kindelsperger, had increased faculty and student diversity at GSSW, “It was very difficult to be a student of color at the University of Denver,” recalls Hernández, who says there were few Hispanic or Chicano faculty on the University of Denver campus at the time. When he joined the GSSW faculty, he was one of six Mexican American faculty members on campus, three of whom were at GSSW. “I knew them all. There were not many faculty of color, but that was also the state of the times. Hispanics were just beginning to make inroads into academia. [GSSW] always had a good representation of people of color on its faculty, but you felt the absence of kindred spirits. It was something you noticed and felt.”

Still, he says, the experience at GSSW was lifechanging. “An intensive educational experience, such as pursing a graduate degree, changes how you view yourself, your values, your basic sense of identity. The GSSW doctoral program was that sort of experience for me,” Hernández says. “More than just learning, the process was transformational and made a difference in my career trajectory.”

Hernández was still a PhD student when he joined the faculty as an instructor and then an assistant professor teaching in the school’s Integrative Practice (IP) concentration. “The IP curriculum posits that social work interventions are on a continuum between micro and macro, and social workers need to be social-problem-based and ready to intervene at any level across that continuum,” says Hernández, who took a group of students to the Colorado State Capitol to meet with Chicano civil rights leader and State Rep. Richard Castro, MSW ’75. “It was an interesting concept; students really took to it. The program maximized social work’s orientation toward social action.”

Hernández started his social work career as a hospital attendant supervisor at the San Antonio State Hospital. He held appointments at nine universities and served as dean of the Our Lady of the Lake University Worden School of Social Service (1991–1998) and the University of Texas at Arlington School of Social Work (1998–2008). His teaching and scholarship focused on cross-cultural and generalist social work practice, and mental health.

When Hernández was first appointed as a dean, the university got a letter from an alumnus who thought hiring a Hispanic would “erode” the quality of the school. During his second appointment as a dean — the first Mexican American dean of the school and the only one in the university — campus police heightened security around Hernández’s school when an extremist threatened harm due to Hernández's ethnicity.

“It was difficult in some ways to always feel like you’re carrying that around, that you’re perceived that way,” Hernández says. “But that was mitigated by the number of times Hispanics commented how proud they were to have someone like themselves in such a position.”

Hernández has witnessed much transformation over his social work career, “But the more things change, the more they stay the same,” he says. “We made great strides in the ’70s and ’80s — more resources, scholarships, grants, activism on campus, a concern about poor people and disenfranchised groups — there were actions being taken, faculty were involved in community efforts,” he says. “Now it’s become more academic. We talk about social justice and social action in the curriculum as though it’s an academic subject. We don’t get students involved as much.”

That’s an unfortunate outgrowth, he says, of the increasing credentialization of social work and the commercialization and corporatization of higher education, coupled with expanding faculty responsibilities.

When Texas proposed licensing social workers in the 1960s, Hispanic social workers were opposed — at the time, they saw licensure as “another level of exclusion,” says Hernández. When minorities first began to enter the profession through the paraprofessional movement, Hernández explains, getting a degree was an obstacle. “We then started making inroads toward getting degrees, and then it seemed the goalposts shifted; you then had to get licensed.” Although licensure is more accepted today, many people of color continue to have difficulty with the process, says Hernández, an LMSW-AP.

While social work has made progress with licensure and title protection, Hernández says, the profession continues to face multiple challenging issues. “In addition, the same social issues we were struggling with in the ’60s and ’70s have come back around,” he continues. Issues such as poverty, racism, immigration, women’s health, voting rights and educational access. “We have not been as effective when it comes to the social safety nets. We haven’t made the case that public expenditures for social programs are an investment the same way tax deferments are an investment for business.”

“In some ways I’m glad I’m retired,” adds Hernández, who left full-time teaching and administration in 2011 (he still teaches as an adjunct) but remains involved in volunteer work. “And in some ways, I wish I was still in the fight.”

“Every job I’ve ever taken was a stretch — I always had to grow into the job,” says Hernández. “Throughout my career I was always striving for something that seemed just beyond my reach. That allowed me to grow and thrive.”

Hernández received lifetime achievement awards from the Association of Latina and Latino Social Worker Educators and the Alamo branch of the National Association of Social Workers Texas Chapter. Accomplishments of which he’s particularly proud include endowment of the Carolyn C. and Santos H. Hernández Scholarship for University of Texas at Arlington social work students and establishing the Santos H. and Carolyn C. Hernandez Scholarship for social work and education students at Our Lady of the Lake University. “I went to school one semester at a time because I never knew if I’d have enough money to start the next semester,” Hernández recalls. “So, my wife and I funded these scholarships for nontraditional students who were single parents, returning to school, first-generation, or who were minority and just needed some extra help. For me, education and social work are similar. They both empower people and provide access and opportunity. That is what we want to achieve through these scholarships.”

At the end of the day, Hernández says, “My greatest achievement is to have earned the esteem of colleagues and people whose opinions value. People I see doing well in their own careers, people like [GSSW Professor] Deb Ortega,” he says, and people like the social worker he’d never met who wrote to say that seeing someone like him in a position of leadership was inspiring.

“I was fortunate to have met so many colleagues and friends throughout the country and to have worked with so many outstanding students during my career,” Hernández says, noting that many of those people went on to make significant contributions in the field.

As Hernández developed his own career, he says, “There weren’t many Hispanic social work educators, not to mention deans. Being a dean gave me a certain prominence whether it was earned or not. We’ve had good role models, though they’ve been few and far between. But it's getting better.

“My own awakening was when people started looking at me as a role model. I wasn’t prepared for that,” Hernández adds. “As one of few Hispanic deans in the country, people look toward you. You have an impact you don’t even realize.”