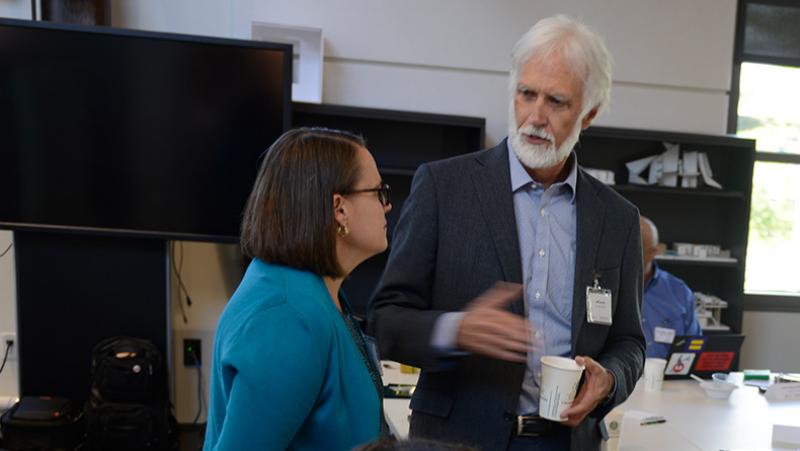 At the Grand Challenges for Social Work Western Consortium meeting in September, dozens of social work educators, researchers and practitioners from the western U.S. convened to discuss “Town-Gown Collaborations for the Implementation of the Grand Challenges.”

Among them were University of Denver Graduate School of Social Work (GSSW) Professors Jennifer Bellamy and Jeff Jenson. Jenson gave the conference keynote address, outlining a process by which universities can “unleash the power of prevention” through state and community partnerships among policymakers, practitioners and researchers.

It’s a topic Jenson is particularly well-suited to address. He is a co-lead of the Grand Challenge to Ensure Healthy Development for All Youth and co-authored its guiding framework: Unleashing the Power of Prevention to reduce the incidence and prevalence of youth behavioral health problems by 20% within a decade. Jenson’s keynote described the progress being made in the grand challenge, while two panels he formed provided additional detail on establishing state-level partnerships to promote effective preventive interventions, including the Communities That Care program implementation in Colorado.

Led by Colorado State University Associate Professor Anne Williford, GSSW PhD ’09, another session focused on prevention training modules created by Williford; Jenson; Arizona State University Associate Professor Elizabeth Anthony, GSSW PhD’06; and GSSW Professor Kimberly Bender. The training modules are an initiative of the Coalition for the Promotion of Behavioral Health, an interdisciplinary group of researchers, practitioners and policymakers working together to make progress on the seven action steps outlined in the Unleashing the Power of Prevention report.

All of this demonstrates the progress that is possible when a grand challenge has specific goals and action steps, Jenson says, as well as a cohort of committed researchers and practitioners championing the work at every opportunity.

For Jenson, that has meant working with the Colorado Department of Human Services Office of Behavioral Health to create Colorado’s first statewide strategic plan for prevention of substance abuse. The 2019–2024 plan focuses on advancing prevention through evidence-based programs and strategies, strengthening the prevention workforce, aligning state agency funders of prevention, and addressing inequities in substance abuse and access to prevention services.

Progress has also required that Jenson make multiple trips to the Colorado State Capitol to testify on behalf of prevention-related budgets and legislation, including a new bill that would, among other things, create a cross-university collaboration aimed at increasing the implementation of tested and effective prevention programs. The proposed collaboration includes Jenson and colleagues from the University of Denver, University of Colorado-Boulder and Colorado State University.

Jenson and fellow prevention champions have been doing similar work in Utah and Washington, and they’re next headed to Delaware to meet with the lieutenant governor about expanding prevention work in that state. “We’re beginning the processes of identifying gaps in their prevention delivery system and figuring out ways to fill those gaps,” says Jenson, GSSW’s Phillip D. & Eleanor G. Winn Endowed Professor for Children and Youth.

“We have a model that we’re bringing to other states to help them deliver tested and effective prevention programs,” Jenson adds. “We’re working with states to improve their infrastructure to deliver prevention programs, and even before that, to get them up to speed on the evidence base of prevention and its ability to save dollars.”

Schools of social work also need to get up to speed on prevention science, Jenson notes. In a recent editorial for the journal Research on Social Work Practice, he argues that “Although policy, practice, and research in reducing behavioral health problems have increased dramatically in the past several decades, social work has been slow to join other disciplines in the critical debate about the most effective and humane ways to prevent behavioral health problems. It is time for social work to adopt prevention as a guiding framework for practice, policy, advocacy, and research in behavioral health settings.”

Join us Feb. 19, 2020, to discuss the Grand Challenge to Create Social Responses to a Changing Environment.