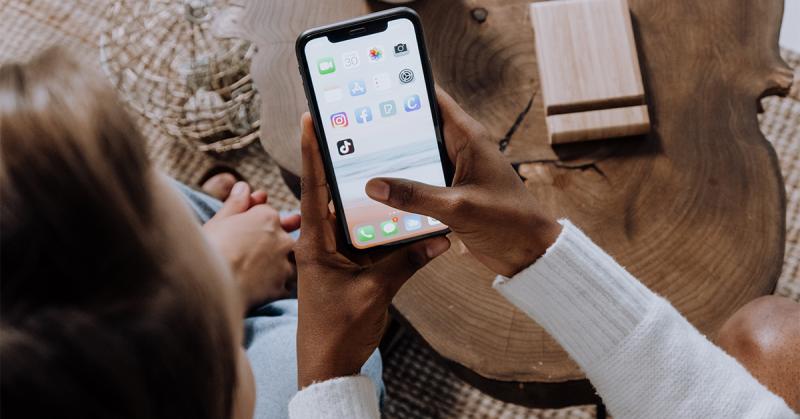 [This story is the last in a three-part series that explores the intersections of technology with social work practice, education and research.]

Can a smartphone app advance anti-racist practice in social work? That may seem like a tall order for technology, but it’s the hope of Associate Professor Michele Hanna, associate dean for diversity, equity and inclusion (DEI) at the University of Denver Graduate School of Social Work (GSSW).

Hanna and colleagues are designing and piloting an app that will augment DEI training while also cultivating a DEI-focused culture. Imagine you’re in an agency and take DEI training; once the training is over, Hanna says, participants are often left wondering, “Now what? How do I put this into practice?” The app would facilitate ongoing, interactive, collaborative learning and community building.

“Most of what we do in traditional training doesn’t work,” Hanna says. “We’re throwing a lot of information at people, but if they’re not having that experiential component, they’re not retaining it. That’s what we’re trying to create — a community experience around these issues.”

The DEI app is just in the early design phases, but it’s an example of how technology is finding its way into all aspects of social work, including research — in this case, an experiment in organizational change.

“With technology, a lot of the time it’s almost like science fiction. You’re imagining what could be but don’t know what’s coming down the pipeline,” says GSSW Assistant Professor Anthony Fulginiti, who uses social networks and artificial intelligence (AI) in his suicide prevention research. Technology innovations in social work have been accelerated in the context of the COVID-19 pandemic, he says. “You’re seeing a lot more digital interventions, more opportunities for people to engage in social work direct practice.” That is driving intervention innovations alongside an expanding use of technology to conduct research in new ways.

Learn more about how technology is changing social work practice.

“Technology can revolutionize social work,” says Associate Professor Anamika Barman Adhikari, who incorporates social networks and AI in her work with youth experiencing homelessness. “We need to approach technology as a tool for equity.”

At the same time, she says, there is a risk that technology could make things worse for people who are the most vulnerable. For example, Florida used an algorithm to decide who would get bail and who wouldn’t, but the algorithm reflected the bias of the data it adopted: Detainees of color were being given harsher sentences than white detainees. “Garbage data in, garbage data out,” Barman Adhikari says, noting that the people developing most technological innovations aren’t social workers and often have limited understanding of the systemic and individual impacts of power, privilege and oppression or the complex dynamics of social problems — or even a basic understanding of the populations social workers serve.

“Those of us who have been in the technology space have known for a long time that tech can be great or be terrible,” says Loyola University Associate Professor Jonathan Singer, co-lead of the Grand Challenge to harness technology for social good.

On the flip side — with care, attention, and the right experts at the table — technology can be leveraged to improve interventions. Los Angeles, for instance, is using predictive modeling to prioritize people for intervention to prevent homelessness. And GSSW Assistant Professor Donny Gerke has been studying a new intervention that uses technology to improve HIV treatment among young men who have sex with men.

Technology has been transforming social work, but social work could also transform technology, Barman Adhikari says. There is an ongoing debate, she notes, over whether technology is a private good or a social good. Can it do both? If so, how?

For her research, Barman Adhikari reached out to Facebook to discuss using the platform to identify young people who may be at risk for homelessness. She never heard back.

“Technology can be a force for good, but how do [social workers] center ourselves and our values in that conversation?” Barman Adhikari wonders. “How do we have that conversation with the technology world and help them understand how our perspective could help them design a product that is much less harmful?”

She recently put those questions to a panel of technology leaders, asking how they leverage their power, their data, for the greater public good. “None had a very practical response,” she says.

As a field, Barman Adhikari says, social work needs to be training people to participate in multidisciplinary tech teams, to use predictive analytics ethically, and to recognize and address problems where they exist. That means not just training social workers in technology, but training technologists in social work. But with rare exception, those courses don’t yet exist.

Learn more about how technology is changing social work education.

Singer was a member of the Council on Social Work Education (CSWE) Futures Task Force, which identified technology and leadership as the main axes for possible futures, one of which envisioned social workers as leaders in the revolution of technology. For that to happen, he says, we’ll need to see developments such as inclusion of social workers on the boards of directors of major technology companies. “Social workers need to be involved from the beginning of a tech project so that the needs and expectations of communities we work with are considered and respected, not just seen as endusers,” Singer says.

On a small scale, Singer notes, social workers can and should be informing the work of technology startups. On a broader scale, Singer says organizations such as CSWE and the National Association of Social Workers need to leverage their clout to influence corporations such as Google.

Specific Grand Challenge recommendations include developing social workers who will apply big data for social good and integrate information and communication technology into social work practice; developing, testing, and refining new interventions that use technology in social work practice; and initiating and fostering interdisciplinary partnerships and collaborations with technologists, computer scientists, software engineers, and business management. For these things to happen, schools of social work must begin to forge alliances with computer science, math and related disciplines, and to train social work students to conduct research on technology itself.

Singer challenges social workers to think big and imagine the possibilities. What if, for instance, social work partnered with Amazon to recognize vocal patterns indicative of increased risk of violence. And what if Amazon’s Alexa — as it’s listening in to what’s going on in a household — could interrupt domestic violence and prevent harm? “Is it ethical? What does it mean to have Amazon listen in when people are fighting? That’s where social work research can dive in,” he says. “That would be amazing.”